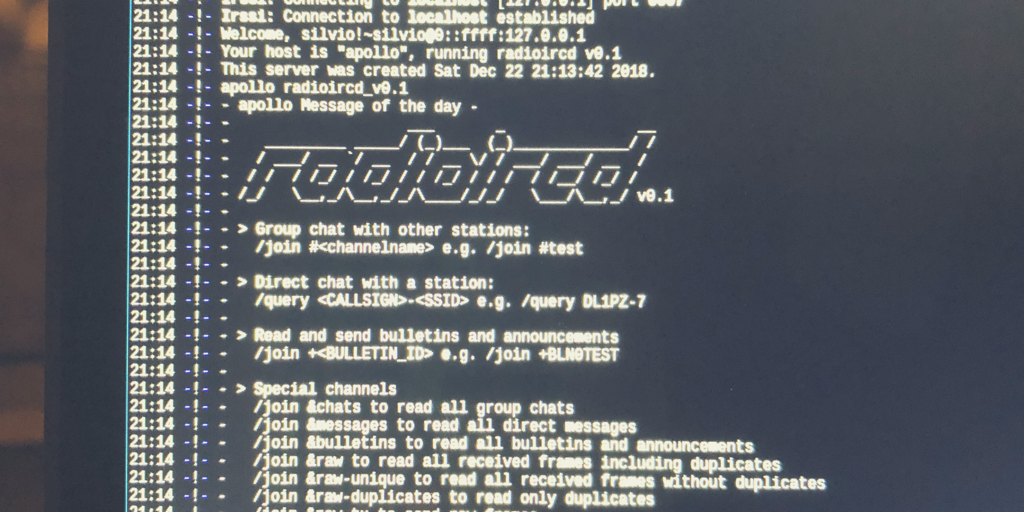 Just over two years ago, I wrote about a project idea in this blog. An open source APRS client for the command line (German) should be there in my opinion. What exactly I imagined at that time, you can read in this article.

Björn Swierczek (DL1PZ) and Jan Behrens (DL9JBE) took up my idea and implemented it within a few weeks. Both did not occupy themselves with AX.25, APRS and KISS previously, they had only begun with these three interacting components through this project. That’s where the radioircd (pronounced Radio IRC daemon) emerged.

Radioircd is an experimental IRC server with a channel-based group chat, which can simply be used with any IRC-Client.

The radioircd chat protocol is based on AX.25. Furthermore, radioircd supports direct messages to other stations as well as bulletin and announcement messages. Radioircd seeks to be compatible to APRS and can use the existing APRS infrastructure.

For transmitting and receiving, the server connects to a TNC using KISS over TCP. The TCP needs to be connected to a radio.

For the first steps it is advisable to install, configure and start direwolf. The sound modem direwolf then acts as a TNC.

Radioircd itself can be downloaded at the following URL. The installation on Ubuntu, Debian or Raspbian is described in the README file.

0 comments on “radioircd – experimental version of an APRS chat published”